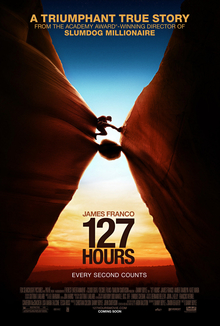 Riveting, gut-wrenching and inspirational, 127 Hours is not just a story of survival, but one of rediscovery. The film is a testament to the power of the human will to endure against all odds and a viewfinder into a man’s journey of introspection & confrontation with his past self.

Nominated for six Academy Awards, including Best Actor and Best Picture, it is a survival drama film which tells the real-life story of Aron Ralston who was trapped in an isolated slot canyon – an ordeal that lasted roughly five days, or 127 hours to be exact.

Played by James Franco who delivers his best performance yet, Aron is a lone mountaineer who heads off to Utah’s Canyonlands National Park over the weekend for a quick getaway from the city’s familiar sights and sounds. He rides his bicycle across the desert hills & rocks in a reckless but otherwise, adrenaline-pumping sequence. He befriends two female hikers along the way and displays his youthful exuberance as he introduces them to his favourite hidden spot of the park – a crystal blue underground lake.

Soon, Aron is off on his own again and resumes his adventure into Bluejohn Canyon. As he descends into another canyon, a boulder he has been standing on dislodges, sending him tumbling down a narrow channel. The boulder follows suit, crushing and pinning his right forearm. He is trapped.

At first, he violently bashes himself against the boulder in a desperate attempt to free himself. Then, he screams for help. His cries echo throughout the wilderness and fades into a deafening silence. There is no cellular service. He has not told anyone about the trip. There is no one nearby. He comes to a realization – he is alone.

A film that is deeply entrenched in one claustrophobic location for most of its runtime may sound boring & lackluster but Academy Award winning director, Danny Boyle, exploits his impressive range of vocabulary over the filmic language. He combines distinctive & beautiful visuals, Franco’s compelling performance along with A.R. Rahman’s intense soundtrack to deliver an intimate & harrowing experience that will leave viewers feeling dehydrated and slightly nauseated.

From the aerial drone shots to capture the beauty & emptiness of the landscape to the low-angle SnorriCam shots to capture the character’s state of disorientation, 127 Hours utilizes a wide variety of distinctive cinematographic techniques at its disposal to construct a highly subjective & personal perspective on Aron’s predicament. Unique editing techniques, such as the frequent use of jump cuts to show the painful passage of time in repetitive actions and the intentional reduction of frame rates in certain sequences to convey a sense of dissociative amnesia & delirium, are employed to build upon that effect as well.

Its most signature technique, the split screen montage, often utilizes abstract imagery such as moving crowds, urban environments & other symbolic aesthetics to visually establish the character’s motivations & thoughts with neither words nor dialogues. The rapid transitions of these montages also create a high-octane tempo that not only matches the energetic persona or frenzied state of the character but also provides sufficient momentum & dynamism to carry the film.

Thankfully, style is not without its substance. While technically impressive & stylistically unique, the story has a lot of heart as well. At its core, 127 Hours is a man’s reflection of his life through his memories & regrets, dreams & desires. While this story is a journey of self-discovery for the character, it is also a gateway that invites audiences to contemplate and re-evaluate their current lives as well.

Beneath the layers of regret, guilt & desperation, Aron’s flashbacks & hallucinations manifest as vehicles for audiences to peel back the layers of his past relationships & experiences, including those with a former lover and his family, in multiple stages. Eventually, this act of self-exploration & deconstruction leads him to accept the poignant truth – he has been pushing people away and the boulder is his comeuppance for his hubris.

Yet, it is never too late to change. The ordeal is not meant to be a death sentence, but that of a costly teaching moment and ultimately, a chance to turn around. After the melancholic epiphany, Aron has a vision of his future son, spurring his will to live. He uses his newfound determination to break free during the climax, in what can only be described as grisly, incredible and cathartic.

That said, the film’s ending cannot be discounted because it is one of the most extraordinary, emotionally resonant and powerful cinematic experiences. As Aron treks across the valley in search for rescue, the music drums up a sense of hope & optimism before transcending into one of pure euphoria. There are no words that can truly express the feeling of liberation after being trapped in a claustrophobic environment for a long time, onscreen and in reality.

127 Hours is both a technical masterpiece that pushes the boundaries of filmmaking & visual language as well as an incredible & personal story that explores aspects of the human condition. It may be tough to watch, but the film is a triumph born out of a tragedy, an uplifting & thought-provoking one, that encourages the same introspection & reflection into who we were, who we are and who we want to be.